Test your rhythmic abilities with 5 challenging games! Featuring staple Nintendo series like Super Mario, and The Legend of Zelda, this compilation pays tribute to some of gaming's best franchises. Oh, and if you get a Superb rank on all 5 levels, you might get a little bonus!

Made in 5 days for the

Alright time to elaborate because this has CRAZY potential even just being for a five day game jam thing like OH MY GOSH.

This is crazy well done.  The inputs all feel very satisfying to pull off, and the telegraphing is, for the most part, pretty understandable even without a tutorial.  I think there are only a few things I would critique or have as advice.  The first of which is a pause menu would be really nice because this remix is kicking my butt and I just have to close my game every time I want to retry.  Two, the Metroid game cues overlap one another and sometimes it's REALLY hard to tell when exactly I'm going to need to shoot and when I don't.  It's not impossible after many attempts, but it's more memory than rhythm at a certain point.

The Kirby one was BY FAR the best.  Excellent execution, sprite art, difficulty, and telegraphing.  And the remix is very well executed.

As I said, this is an extremely well-made product for being made in a game jam or anything like that.  But wow, I really look forward to what you make in the future because this is very promising ^^

Thank you so much for the feedback! My team did an amazing job with their art and code, I couldn't be more proud of them. As far as Metroid goes, my direction was a little off with that one haha. Gotta be a weak link in every project :)

I will fully admit that I have the rhythm sense of a white person, but I feel like it was still pretty gotdang hard to find the rhythm in most of the stages, Metroid especially. Couldn't even beat the last stage. Fun game anyway. 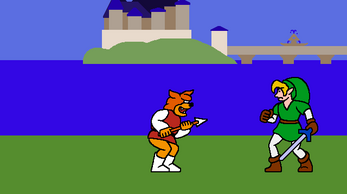